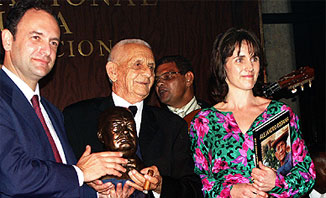 La Habana, February 25, 2004.- The Sixth Edition of the Habano Festival has paid a special homage to Sir Winston Churchill, one of the most illustrious smokers of Habanos cigars. His passion for Cuban black tobacco gave origin to one of its best known formats, the Churchill, originally manufactured at the Romeo y Julieta factory. Today, this format is part of the wide range of Habanos, S.A.

The upcoming opening of the Floridita restaurant in London, which will include a Casa del Habano – the first in Great Britain – has been the main motive for the celebration of this unique event, which Habanos, S.A. wanted to feast in a very special way by inviting Jenny Reppard, the granddaughter of Sir Winston Churchill.

It has been said that the former British Prime Minister smoked some 300 000 Habanos during his long life, and although not all were of the 178 mm x 18.65 mm size, this was the format he preferred. In 1947, he visited Romeo y Julieta factory and acknowledging him as one of its most emblematic “ambassadors”, Habanos, S.A. decided to change the name of this size to Churchill.

During the homage, held in the gardens of the emblematic Hotel Nacional de Cuba, Jenny Reppard received a humidor designed specially for the occasion by the tobacco farmer Alejandro Robaina who will be 85 next March. In turn, Robaina received a bust of the former British Prime Minister and a cake of impressive length of more than three and a half meters, designed as a format of the famous Churchills.

During the gala evening, an edición especial (special edition) of the Churchill format of Romeo y Julieta brand was tasted, as well as a Daiquiri created, in honor of the upcoming opening of the Floridita in the British capital, by the famous British mixologist Nick Strangeway, who adds tea to the traditional recipe. The toast was made with Pol Roger Churchill champagne, which also bears his name for having been the choice of his preference.

The music that can never be absent from any celebration in Cuba was under the direction of the famous producer Steve Brown, and included the performances of Liz Fletcher & The Blue Rhythm Band and the Música Floridita Group.

Habanos, S.A., world leader in the “Premium” cigar market, commercializes habanos in Cuba and all over the world. For this purpose, it has an exclusive distribution network in the five continents, covering more than 120 countries.