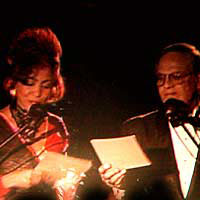 “El laguito” dressed in its best garment. Guests to the Gala Supper were welcomed by the sonorities of a Big Band that played outstanding melodies. Right were the announcers when saying: the supper predicted a true party to the senses.

Taking the menu on one’s hands. Lingering at the extremely delicate dishes presented there. Feeling the fine fragrance of the Lanzon Champagne, while one’s sight stood fixed on the detail of a passionate audio-visual biography of the cigar displayed through the seventh art… everything was arranged to provide enjoyment.

If the cinema knew and always used cigars as an expressive means to provide magic to an environment, mystery to a scene, glamour to a personage, or sense to a whole movie genre; the summit evening party of the “good smoking” date knew about the pleasure and the devils of tasting a Habano, together with the Montecristo No. 5 ring gauges, the Coloniales de Trinidad, the Siglo VI de Cohiba and, last, the V Anniversary de San Cristobal de la Habana.

It is said that Orson Wells asserted that he made movies in order to smoke Habanos for free, and this is why both the hero and vile smoke them in his movies… A Foie Gras VI Festival, joined by a 2002 season White Diamond, preceded the first cigar and, while the screens showed classical movies, came the coconut-fashioned tomato soup and the fragrance of the cañasanta with the classical Chardonnay de Sardá, 2002 season.

In like manner appeared the second course and the dessert. Between the former and the latter, the Siglo VI cigar and the black cinema, which preceded the Sampling boys, who played Harry Belafonte´s Zarathustra and Banana Boggie.

As the main character of the VI Edition of the Festival had been the San Cristobal de la Habana, a brand created in 1999 by Habanos S.A., guests should enjoy the last cigar out of courtesy and with singular fullness. An Aged Solera San Cristóbal de la Habana Rum dominated on all tables and the last two surprises of the night were made known.

The Awards Ceremony for the Habanos Men was introduced by Oscar Basulto Torres, Co-president. Osvaldo Encarnación, Tabacuba President, announced that, for the first time, one of the traditional titles had been conferred to a woman: Hilda Baró, of the Partagás factory, got her deserved laurel wreath for Manufacture, while the Retail Sales, Communication, and Business awards were conferred to Jesús Llanos, from Spain; Orlando Quiroga, a well known Cuban writer and researchers; and Mohamed Zaidan, from Lebanon, respectively.

But the night main course came after the dessert. Conveying a beautiful message of fraternity and kindness, five lots were put at the disposal of diners, who showed special admiration when they listened to the presentation of the works.