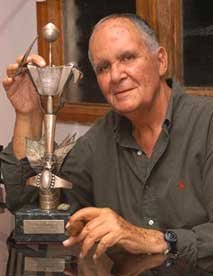 Writer, reporter and TV screenwriter Orlando Quiroga (73) passed away yesterday due to a liver disease.

Passionate for cigars as many, he was bestowed with the Habanos Man of the Year Award in 2003, in the Category of Communication. Also writer of various books related to Cuban cigars, he endorsed his works with his personal style of writing signed with elegance, cleanness and sharp-quick notes.

He was author of many books, among them: “Nada es imposible” (1996, Book of his own memoirs), a novel called “Muñecas de cristal” (1998); “El habano al rojo vivo” (2003) and “Arte y Mística del Habano” in which he gathers all the history and tradition of the Habano.

He received several national and international awards as a journalist, TV writer and scriptwriter for the “Anthology of the Bolero” in Spain and many medals such as the Fine Arts Medal, the Grand Theatre of Havana Medal, the Cuban Artist and writers Union Medal and the order of Jesús Menéndez and Raúl Gómez García.

We would like to extend our condolences to his family and close friends.