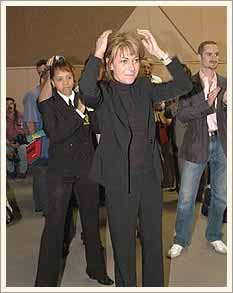 After qualifying for the finals at the preliminary round of the International Habanosommelier Competition held on February 27, Manuela Romeralo has won the Habanosommelier 2006 Award after winning the final today over her German and Cuban rivals.

The preliminary round consisted of a theoretical exam in which she proved her knowledge of the different brands and factory names of Habanos. The Valencian sumiller competed with style and obtained the highest score.

The three finalists, Cuban Zutlay Nápoles, from the Restaurant Floridita, German Hendrik Thoma, from Jacobs Restaurant and herself, competed in the practical test, cutting and lighting Habanos, the cigar testing session and combining Habanos with different drinks.

Manuela Romeralo
34-year old Romeralo, is the first woman to win the Habanosommelier International Competition. Earlier this year, she had also become the first woman to win the national Cata Montecristo tasting competition. She is a lover of Cuban black tobacco, “the best tobacco in the world thanks to its unique soil and the craftsmanship involved”.

Her restaurant, “La Sucursal”; has recently been awarded a Michelin star, has an extensive cigar list on the menu, and considers cigar smoking as part of a complete meal.

The International Habanosommelier Competition is an event that is fast gaining a following from a growing number of enthusiasts who ask the sommelier for advice when choosing a Habano. The participants are the sommeliers who have won their respective national competitions.