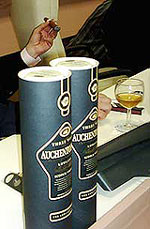 Macallan Cask Strength and Partagás Pirámide make the perfect brotherhood, according to the final verdict of the Whisky and Cigar Challenge Contest, presided by Damian Riley-Smith, director of the Scottish Whisky Magazine.

A total of 400 judges gathered on Thursday afternoon to taste, together with the Habanos Montecristi No. 2 and Partagás Pirámide, the four combinations resulting from Monday’s preliminary, when two whisky brands were selected: Macallan Cask Strength, 57.4% abv, and Chieftain’s Cigar Malt Aged 13 Years, 50% abv.

Riley explained that the first round had begun in Glasgow, Scotland, with 24 whisky brands and the same two Habanos. Eight brands of that exquisite liquor were savoured there, together with the aforementioned cigars, which were part of the mystery to the less trained participants until the final verdict.