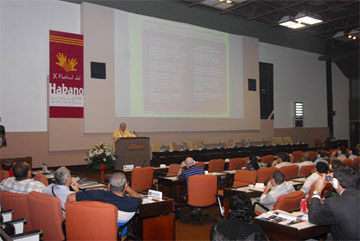 Havana, February 29, 2008. – More than 1,800 participants from 75 countries have gathered this year at the X Habanos’ Festival, formally opened last Monday February 25 with the Welcome Night, a gala where the 2 main products – launched by Habanos S.A. in 2008 – were announced: Hoyo de Monterrey Epicure Especial and H.Upmann Mágnum 50.

In their welcome speeches, Óscar Basulto and Buenaventura Jiménez, Co-Chairmen of Habanos S.A., thanked all participants for their support over these last ten years, and stressed the consolidation of the Habanos’ Festival as the landmark international event for Premium cigars lovers.

Mr Raúl de la Nuez, Cuban Minister of Foreign Trade opened the Trade Fair, which this year is gathering more than 50 companies. In his speech, Mr de la Nuez stated that the tobacco sector is ranked third in the country in terms of exports, and confirmed the consolidation of the Habanos’ Festival as the most relevant event in the world for Premium cigars. 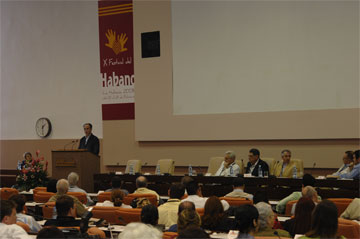 This year, more than 1,800 Habanos’ lovers from all over the world have gathered at the Festival, including Cuban and international personalities who share their passion for the product. The International Seminar, a series of conferences and speeches within the Festival, invited a number of relevant Cuban artists who share with the rest of participants their love for the magic of a Habano: musicians Masters as Chucho Valdés and Leo Brouwer, actors such as Rogelio Blaín and José Antonio Rodríguez and plastic arts’ artists as Nelson Domínguez. 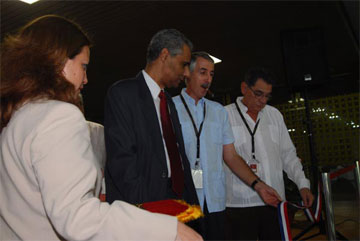 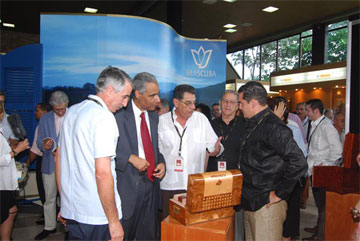 A sophisticated marriage of smoke and bubbles

To celebrate its first decade of life, the Habanos’ Festival also became a stage for the presentation of new and sophisticated ways to enjoy a Habano. Besides the traditional international Habanosommelier and Habanos-Armagnac Contests, this year a marriage between Champagne and Habanos was held for the first time, presented by James Suckling, the famous journalist from the Cigar Aficionado magazine, and several officers from Habanos S.A.. The tasting took place at the Hotel Nacional in Havana, and offered the possibility of combining the three Limited Edition 2008 that Habanos S.A. will launch in 2008: Partagás Serie D Nº 5, Montecristo Sublimes and Cuaba Pirámides, with three champagnes from Part des Anges, whose champagne 1980 was elected as one of the top five champagnes in the world. 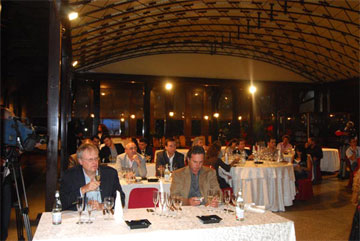 James Suckling started with a combination of the mildest Habano with the youngest champagne: Cuba Pirámides with Part des Anges 1996. Then it was followed by a more powerful combination: Partagás Serie D Nº 5 with Part des Anges 1988, and finished with the most mature and aged flavors: Montecristo Sublimes and the 1980 champagne. Suckling stressed that, in his opinion, the best combination was Montecristo Sublimes with champagne 1980, because of the very suggestive texture of both products. The Habano evokes the flavor of the champagne, and vice versa. “It is a very balanced, perfect combination”, stated James Suckling. 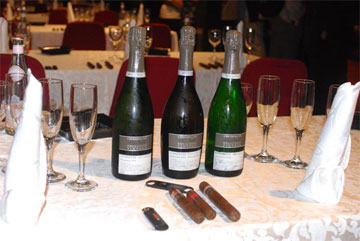 Participants in this event admitted that the combination of bubbles and smoke is quite a unique an unexplored match, with a potential to become one of the most innovative and suggestive combination for the most demanding palates.

Habanos S.A., world leader in the “Premium” cigar market, sells Habanos in Cuba, and in the rest of the world, through its Exclusive Distributors Network in more than 150 countries in all five continents, and through its “La Casa del Habano” franchised network. These franchised shops have been very successful since their establishment, and have been consolidated with an impressive business growth. Currently this Network includes more than 130 stores all over the world, both in Domestic and in Duty Free – Travel Retail markets. These luxury Habanos points of sales have become the benchmark for international Habanos retail sales.

Part des Anges, was established in 2006 by two expert champagne lovers, Laurent Buob and Thierry Richard, who set up a team made by the best champagne enologists and champagne masters. The company’s headquarters are located in Paris, and their products are distributed all over the world. They specialize in the sale, promotion and distribution of exceptional champagnes and liqueurs.