With over 154 exhibitors and 47 stands was the Commercial Fair of the VI Habanos Festival inaugurated yesterday, an occasion that traditionally brings the professionals of this sector together, and where you can get any kind of goods relating to tasting the Cuban cigar.

The opening speech was made by Raúl de la Nuez, Minister of Foreign Trade, who highlighted the achievements made by Habanos S.A. Corporation and the quality of its events, including the current edition of the Habanos Festival.

Lourdes De la Noval Ortega, a senior specialist in communications from Habanos S.A. Corporation, remarked that this could be called the “Luxury Fair.” Exhibitors display new images having more to do with the Cuban good because of their optimal presentation. 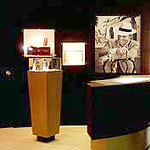 “The Habano is a luxury good.” Therefore, this year our stand represents the Cuban jewels. We are having the unique opportunity of exchanging opinions, experiences, and doing business,” she commented.

As De la Noval informed, this year the fair has enriched with the participation of countries and enterprises that had never participated before, such as Portugal and Baratas.

Regarding the Cuban exhibitors, De la Noval said the Cuban representation is made up of exclusive distributors in the domestic market. Such is the case of the Caracol and Universo shops, of Cuban enterprises such as Durero S.A., in charge of pack printing and production together with the Lithographic Enterprise of Habanos, which has traditionally been the Cuban printing plant more closely related to the Habano cigar world.

Also in this listing are ICT, the Cuban international tobacco enterprise producing the mini-cigars; COTAE, in charge of cigarettes and minor works with the brands, under Habanos license; besides, there are artists, craftsmen and photographers who traditionally join this event.

Next Friday, at the fair closing, the Largest Stand, the Modular Stand, the Free Stand, the Most Visited Stand, and the enterprises that have done more business during this commercial date will be awarded.