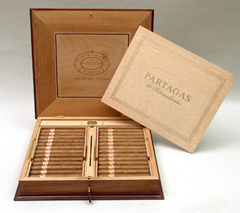 Habanos s.a. is pleased to present the Partagás’ Ancient Humidor which is the result of the skilled hands of Cuban craftsmen.

Exclusively aimed to Casas del Habano worldwide, it’s a duplicate of a stunning and elegant humidor which was supposedly sold during the first decade of the 20th century, of which only 200 units will be produced enhancing the exclusivity that surrounds it.

A Partagás is immediately recognisable by its deep, earthy flavour. The character of its blend springs from a selection of tobaccos from the Vuelta Abajo region chosen for their unmistakable richness of flavour and aroma. Habanos from Partagás come in a wide array of shapes and sizes. The best known are the Serie D No. 4, the Lusitania and the 8-9-8, a cigar that is named after the way it is arranged in its box. The Serie P No 2, a pyramid has rapidly joined to this list as well.

Now, Partagás is bringing over an astonishing size: the Sobresalientes (girth 53 x 153 mm long), exclusively manufactured for this release and comprising 50 of them in each Humidor.

With this offer soon to be commercialized, Partagás has proven its prestigious name and deep character once again.