Humidor with capacity for 400 cigars, decorated by the Cuban painter Carlos Boix.

Elaborated and donated by the Swiss company Michel Perrenoud.

The humidor is accompanied by a box of each of the Habanos brands: Cohiba, Montecristo, Romeo y Julieta, Partagás and Hoyo de Monterrey.

San Cristóbal de La Habana brand was launched in 1999 in honor to the city’s long history, at the dawn of the new Millenium.

lts range is formed by four vitolas, with a mixture of light to medium flavor, elaborated with leaves from Vuelta Abajo region. The name of each of them corresponds to the fortresses situated in the city.

The fifth humidor is in the shape of a pyramid with the original lithograph on which the theme of the festi¬val has been based.

The lot is completed with an original o/ the Cuban painter Alexis Leyva (Kcho) who inspired himself in the history of the city for the realization of this work of art especially for the purpose of this auction.

Work of art craftsman artisan Oscar Patterson Chapman. Major of the National Art School of Cuba. Member of the Cuban Association oi Craftsmen and Artists (ACAA). UNESCO’s Second Prize winner of Craftsmanship for Latin America and the Caribbean (1995) FlART Prize (1995) for the piece that best exhibited cultural and esthetic values, among many others. Furthermore, he holds the Distinction for National Culture (Cuba 1995) and owns works in private collections in Cuba and worldwide.

Built in solid cedar, totally hand crafted by cabinet makers and carpenters, masters in the art of humidifier manufacturing. The humidor has a capacity for storing 2000 cigars, preserved in perfect conditions thanks to its humidifying system “cold-humidity”.

The humidor is part of a very limited serie especially elaborated to celebrate the arrival of the new century.

It contains 2000 cigars of the 20 brands and vitolas of Habanos most demanded internationally, among which, special not usually commercialized vitolas are included: Bolivar Gold Medal, Cohiba Gran Corona, Cuaba Distinguidos and Partagás Salomón No. 2.

The origins of Trinidad as a cigar brand dates back to 1969 and for many years, just as the brand Cohiba, was exclusively used as a gift of the State for high ranking foreign dignitaries. It was in 1998 that this brand was made available to smokers allover the world, but in very limited quantities.

It is elaborated in El Laguito, with a very peculiar mixture of selected tobacco from Vuelta Abajo region, which make it unique and very exclusive.

Painting by the Spaniard Vives Fierro, grand smoker and member of the Epicur Club of Spain.

Humidor that recreates a section of the most relevant colonial constructions of Trinidad city. Totally hand made in solid cedar and mahogany, the iron on the seal of the lid is encompassed by laced tobacco leaves in reference to the tobacco plantation.

It contains 120 cigars, 40 Fundadores, 40 Robus¬tos Especiales, 40 Coloniales. This last collection was elaborated especially for this occasion.

Work of art by artisans Armando Cotalero Prieto and Neurys Alberto Santana, Members of the Cuban Association of Artisans and Artists. Armando Cotalero Prieto, due to his artistic activity was awarded first prize inn Applied Arts in the First Colonial Art Room of Cuba (1995) and first prize in FIART in 1997. They are members of the Cuban selection for UNESCO Craftsmanship prize for Latin America and the Caribbean. They own works in private collections in different countries around the world. Their works have been auctioned in the I, II, III, IV Habanos Festivals.

Lot No. 5
510 ANNIVERSARY OF THE ARRIVAL OF THE CIGAR TO THE OLD WORLD HUMIDOR

This humidor has been handcrafted and constitutes a unique piece within the series of 510 humidors produced to commemorate the 510 Anniversary of the Arrival of the Cigar to theOld Wórld.

This humidor is number 510. lt is made of precious wood: ukola, pommel, cedar, eucalyptus and bubinga, as well as Sycamore in light tones and the only one in the series which uses special techniques allowing us to observe this work of art in full color.

Old case, Cabañas brand, vitola “Superfinos” produced in the decade of the 50’s. lt is a donation of the companies Cigars LTD from the United Kingdom and Conco Communications of Cuba.

Old case, Hoyo de Monterrey brand, “Favoritos de España” produced in the decade of the 50’s. lt is a donation of Club Epicur as a courtesy of its President Mr. José Ilario. 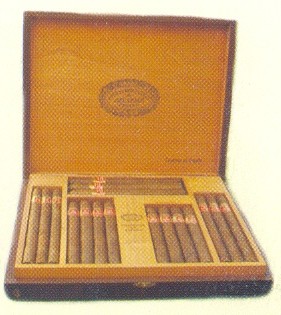 Hoyo de Monterrey brand, created in 1865, owes the origin of its name to the town of San Juan y Martfnez, situated at the heart of Vuelta Abajo region. The plantation, one of the most famous Vlegas de Primera, is found there with the well-known inscription on its entrance door: “Hoyo de Monterrey. José Gener. 1860”.

lts light blended flavor makes it an attractive choice for those who prefer a less strong cigar, delicate and aromatic, with great elegance and complexity.

This humidor is a piece designed and elaborated retrieving the manufacturing patterns of a splendour era. Made from solid cedar with shinny tin and bronze ironwork. Composed of eight compartments, six of which are for storing and preserving the most representative vitolas of the brand.

Work of art of the artisan Adalberto González Albisa. Member of the Cuban Cultural Goods Fund. He has participated in several fairs and national and international exhibitions and owns works of art in private collections in Cuba and the world.

Humidor case that recreates in iron the brand, completely hand-made in solid cedar, with sculptured carving on the lid recreating a colonial style piece of furniture.

Work of artist Mario Leonardo Alvarez Gittens, majored in San Alejandro, has participated in different personal and group exhibitions. Exhibits his works in all launchings of FIART. He has been awarded First Prize and received three mentions in his artistic career He participated in the auction o/ the IV Festival.

The brand was created in 1845 by Don Jaime Partagás and since then has been delighting its smokers. A Partagás is immediately recognized by its rich and intense flavor.

The character of its blending, composed of selected tobacco leafs from Vuelta Abajo region, is of an inimitable richness and aroma.

Classic style humidor piece of furniture entirely hand¬ made with a carving on the lid and doors recreating the iron of the brand.

Work of artists Marlene Silvera Segura and Moisés González Acosta, Marlene Silvera Segura. Sculptor with six years of experience of working with wood, majored in San Alejandro Art School and the Institute of Design. Member of the Cuban Cultural Goods Fund. Has presented her works in personal and group exhibitions both in our country and abroad.

Moisés González Acosta. Self-instructed artist with twelve years of experience. Member of the Association of Artists and Artisans. Has participated in personal and group exhibitions, both nationally and internationally in Colombia, Mexico and Spain. His works have been exhibited in the III and IV Haba¬nos Festivals.

Work of the outstanding artisan Julio Cesar Garrido Correa from Pinar del Río, who has participated in several international exhibitions in countries like Spain, France and Belgium. His works form part of private collections of diferent countries in the world. His works have particjpated in the auctions of the I, II, III, IV Habanos Festivals.

Montecristo is the best know and probably the most appreciated of all Habanos brands. Its name comes from the character in the novel “The Earl of Montecristo” of Alejandro Dumas.

The range of Montecristo covers the tastes of the most demanding smokers. Its exquisite blend is exclusively elaborated from selected leafs of Vuelta Abajo tobacco producing region, land of the best cigars in the world. With a medium to strong flavor, its distinguished aro¬ma continues to capture both experienced smokers and beginners in the cigar world.

Humidor made of precious wood like mahogany and cedar, tastefully decorated in silver, recreating the medieval age; this humidifier is shaped like a typical chest in its time. On the top it has the symbol of Montecristo brand and a padlock where it closes, giving it a touch of originality and elegance. AII the decoration on this chest is manufactured in silver.

Work of self-instructed silversmith Raúl Valladares Valdés of Havana City. In spite of being so young, he has participated in more than 60 exhibitions in Cuba and abroad. He has been awarded various national and international prizes, among which we can highlight the Picasso Medal , pinned by UNESCO world council and the Gold Medal in Line with humidifiers in the International Fair of Havana.

His works are on the hands of distinguished personalities around the world. He is well-known for the creation of The Trophy Habano man of the year. His works have been auctioned in the I, II, III, IV Habanos Festivals.

The making of this table-service is inspired on the strong influence of aboriginal Cuban culture. Its different pieces are totally hand-made by native craftsmen of Baracoa region in the eastern part of the country, where love and respect for delicate traditional wood craftsmanship endure and its secrets have been transmitted for generations.

The wood used is native of remote and mountainous areas of Santiago de Cuba, Holguín and Sagua de Tanamo- Baracoa. The natural beauty of the guaiacum, the granadillo, the teaks and ironwood, the bluebell and the acana or bully tree, the palm tree, the ebony and najesies make this set a very special gift to such an important event as this, inspired in the world’s best cigar on its 5th Festival.

The wood used does not interfere with the kind of food that will be served on it, its colors are natural and in its processing no artificial inks were used and they were polished with pure honey and beeswax.

This table-service is designed for 6 persons and is composed of 72 pieces, apart from others such as: 1 ashtray for cigarettes and mini-cigars, 2 ashtray for cigars, 1 tablecloth with 12 napkins with Cohiba embroidery, hemstitched by hand with techniques dating back to the XVIII and XIX centuries. Work of artisan Miriam Lazo Melgares, 1 oil painting on paper inspired in the theme and suitable for a dining room, 1 bottle of Cognac Cohiba, 1 Cohiba humidor manufactured in five wood types used in the table-service items, containing 50 Cohiba Gran Corona especially elaborated for this humidor.

This art work was carried out by the artisan Jorge Luis Vernier Ferr and Eliud Jiménez Cobas, based on the original idea of artists Susana Hernández and Jorge F. Astorga.

Jorge Luis Vernier Ferr and Eliud Jiménez Cobas have participated in different national and international fairs and exhibitions. Some of their pieces are found in private collections of outstanding political personalities and world culture.

Cohiba is the most prestigious brand in the cigar world. The name “Cohiba” is an old word used by the Taínos Indians. The brand was created in 1966 and for many years it was exclusivelly used for gifts to high-ranking national government officials and foreign state visitors. Since then it is manufactured in the prestigious factory El Laguito, in Havana. The leaves used for Cohiba are “the selection of selection” of the best 5 Vegas de Primera of San Juan y Martlnez and San Luis areas in Vuelta Abajo region.

Cohiba is the only brand of cigars in which two out of the three types of leafs used in its elaboration, go through a third fermentation in barreIs. This very special process is reflected a taste and aroma only this brand has.

Humidor manufactured in cedar, mahogany, bronze and silver. Its design recreates the tobacco plant from its roots to its beautiful leafs of which this marvellous product is obtained, supporting the silver decorated humidifier where the exquisite aroma and singular flavor of the cigar is preserved.

Silver sculpture representing the hand that makes and smokes the cigar, symbol par excellence of good taste, due to its elegance and unmistakable flavor, taking it to the summit.

All the accessories of this case were manufactured in silver.