Cigar roller Jose Castelar Cairo (Cueto) managed to make the world’s longest cigar, a 262-footer that was officially certified by the Guinness Book of World Records in a ceremony also attended by officers, diplomats and guests attending the FITCuba 2011 tradeshow. 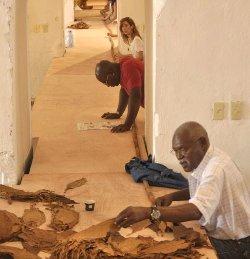 As part of the International Tourism Fair in Havana, Mr. Cueto started out his painstaking weeklong deed in the halls of the Morro-Cabaña Historic Park.

Cueto, who works in the La Triada cigar store run by the Caracol retail company at the Morro-Cabaña Park, had already won four other world records certified by Guinness.

His previous trophies are showcased at La Triada, so the store has turned out to be a highly luring spot among tourists coming from all around the globe, especially cigar lovers and smokers.

With over 50 years of experiences under his belt as a cigar roller, Cueto says the world record for the longest cigar should always belong to Cuba, the home to habanos, the finest premium cigars on the face of the earth.