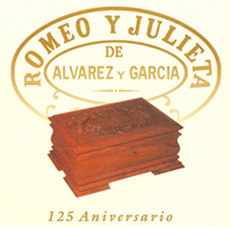 The handmade humidor cabinet, which bears the image of the brand, crafted totally by hand from cedarwood.

This cabinet contains 100 cigars: 50 Double Julietas and 50 Romeos the sizes chosen for marking this anniversary.

The work of outstanding craftsman Julio César Garrido Correa, from Pinar del Río, who has taken part in several international exhibitions in such countries as Spain, France and Belgium. His work can be found in many private collections. Some of his cabinets have been auctioned in activities sponsored by Habanos S.A. He created the Cuaba Humidor which was auctioned during the Gala Dinner in the I Habano Festival.

65th Anniversary of the Montecristo Brand. 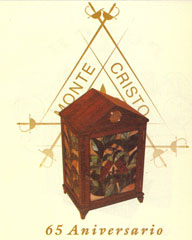 This cabinet is distinguished by the use of stained glass as a basic element. It is a showcase humidor, with glass leaves and tobacco stalks combined with the logo of the brand, linking the harvest of good tobacco with this prestigious brand of Habanos.

The humidor contains 100 cigars Robustos Especiales, a size that was made for first time to celebrate this anniversary.

Made by the artist Eduardo Miguel Aragonés Martínez, from Havana. Self-taught, Aragonés has 17 years of experience and is a member of the National Association of Craftsmen and Artists of Cuba (Asociación Nacional de Artesanos y Artistas de Cuba). In 1997, he won a prize for his artistic work in the Internacional Arts and Crafts Pair (FIART ’97) and an award given by the Regional Arts and Crafts Office of UNESCo. He was chosen to be one of the artists representing Cuba in UNESCO’s Latin­ American, in which he won an honourable mention. His work has been shown in many exhibitions.

160th Anniversary of the Punch Brand.

Cedar humidor cabinet with an embossed leather top, recreating the most representative elements 01 the brand.

It contains a selection of 100 cigars: 25 Double Coronas, 25 Punch Punch de luxe cigars, 25 Aristocráticos, 25 Punchinellos, the last 3 sizes have been elaborated specially for this celebration.

The work of independent creator Carlos Espinosa Vega, from Havana, a graphic designer with a Master in marketing. Experienced in exhibit design, he has won several prizes. He has made numerous leatherwork including the Piramides cabinet which was auctioned during the Dinner of the Millenium.

155th Anniversary of the Partagás Brand. 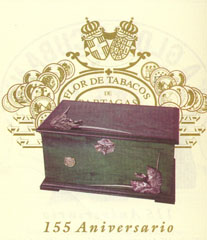 The humidor made of cedar, with silver decorations was especially designed for this important event.

It contains 155 cigars: 155 Diademas, the sizes chosen to mark this anniversary.

The work of self-taught gold and silver smith Raúl Valladares Valdés, of Havana. In spite of his youth, his work has been shown in more than 60 exhibitions in Cuba and abroad. He has won many national and international awards, including the Picasso Medal, given by the World Council of UNESCO, and the Gold Medal for Humidors in the International Fair of Havana.

His work has been purchased by VIPs in all parts of the world. He made a name for himself in the world of Habanos by designing the Habano Man of the Year trophies. Valladares created the Trinidad humidor, which was auctioned during the dinner held on the anniversary of that brand, and the Cohiba humidor, which was auctioned in the course of the Dinner of the Millennium, during the 1st International Habano Festival. 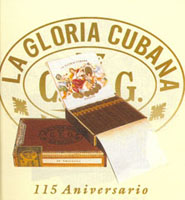 This lot consists of two large, carefully preserved boxes made by the La Gloria Cubana Cigar Factory in the ’30s and ’40s. They were generously donated to this auction by Tabacalera, S.A., of Spain.

The lot contains one box of Triunfo cigars and one of Finos. Both sizes are very valuable, since they have gone out of production.

La Gloria Cubana cigars, a brand created by the Cabañas y Castro Society in 1885, quickly gained prestige among knowledgeable smokers because its well-made Habanos are of excellent aroma, strength and taste. This brand is characterized by medium sizes and tastes that range from light -medium to medium-strong. The brand is still worthy of its considerable tradition. 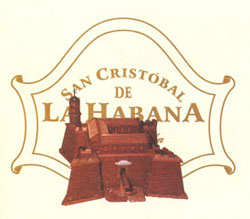 This cabinet has architectural intention, representing Havana’s De la Real Fuerza Castlebuilt after the fundation of the city on November 16, 1516. This brand of cigars was launched to the world market on the ocassion of the 480th anniversary of the city and in the advent of the new millennium. With their exquisite aroma and peerless taste, San Cristóbal de La Habana cigars combine the long tradition that has made Habanos so highly esteemed and the history of the city for which they are named.

The cabinet contains 100 cigars, 25 of each of the four sizes used for this brand.

The work of self-taught master craftsman Armando Cotalero Prieto. A member of the National Association of Craftsmen and Artists of Cuba (Asociación Nacional de Artesanos y Artistas de Cuba), he won first prize in applied arts in the 1st Salon of Colonial Art of Cuba in 1995 and first prize in the 1997 lnternational Arts and Crafts Fair (FIARI ’97) and was chosen to be one of the artists representing Cuba in UNESCO’s Latin-American and Caribbean contest. His work can be found in private collections in the Bahamas, Canada, the United States and Mexico. Cotalero was the creator of the Trinidad humidor, which was auctioned in the course of the Dinner of the Millenium, during the 1st lnternational Habano Festival.

Bronze sculpture 6 feet (2.1 meters) tall and a humidor cabinet of mahogany and cedar embellished with silver and containing a selection of special and traditional sizes of the new brand s of Habanos.

More than a humidor, the Year 2000 humidor is a majestic work of art whose futuristic, modern design employs curves, textures and movements to represent the man of the new millennium with shreds of tobacco and depict traditional Habanos in the new era with contemporary art, from its root, its leaves, the molds, its skin recreated with tobacco strands, bound in all this traditional Habano.

The work of self-taught gold and silversmith Raúl Válladares Váldés, from Havana