There are in the world just a few things that are known without question to be the best of their kind. A Habano is one of them.

In Cuba in 1492 the Spanish expedition commanded by Christopher Columbus saw tobacco for the first time in the New World. The Taino Indians rolled and burnt some mysterious leaves, which they called Cohiba, in an unknown ceremony for the explorers. From that starting point more than five hundred years ago, tobacco has been traded and planted throughout the world. Since its discovery, Tabaco Negro Cubano or Cuban Black Tobacco has been considered the best in the world because of the unique growing conditions in some areas of the Island. This distinction remains incontestably valid after more than five centuries.

The heart of the distinction is the tobacco and its taste born of a combination of four factors that exist only in Cuba: the soil, the climate, the varieties of Cuban black tobacco seed and the know-how of the tobacco growers and cigar makers. Other places may have acquired some Cuban skills, even some Cuban seeds, but never the natural gifts of the Cuban soil and the Cuban climate. These you will find nowhere else.

Nor will you find anything that matches the centuries-old culture of cultivating Cuban tobacco: the extraordinary labour that the tobacco farmer invests in his crop; the months and years of patient waiting before his leaf is deemed fit for a Habano.

A further distinction lies in the definition of the term “Habanos”. All Habanos are Cuban, but by no means all Cuban cigars are Habanos.

The title is the Denominación de Origen Protegida (D.O.P), or Protected Denomination of Origin reserved for a selection of the most outstanding brands whose cigars are manufactured to the most exacting standards from tobaccos grown only in particular areas, which are also protected as denominations of origin.

All Habanos are crafted Totalmente a Mano  totally by hand  using methods that were pioneered in Havana two centuries ago and remain virtually unchanged to this day.

More than 500 manual tasks are performed in both the agricultural and manufacturing processes from the planting of the seeds to the Habano’s final resting place in its box.

Every cigar must pass through the most stringent quality control processes established by the Regulatory Council for the Protected Denomination of Origin (D.O.P.) Habanos before they can earn the precious title of Habano.

A benchmark for excellence.

When you have a reputation like Habanos, it is no surprise that unscrupulous persons will try to pass off their product as yours.
Here are the authenticating marks that you should look for when buying Habanos. It’s also important always to buy your cigars at authorised shops.

The warranty seal was first introduced in 1889 by Royal Decree of the King of Spain. Then in 1912 the independent Cuban Government passed a law authorising the use of a new design, which is similar to the one in use today. It was modified slightly in 1931 and more radically in 1999 with the addition of the red serial number and an emblem that is visible only under ultra-violet light.

Most recently, in 2009, a new version was introduced with a hologram on each seal as well as an individual bar code that tracks every box of Habanos from production to each Habanos s.a. exclusive distributor anywhere in the world. The bar code allows you to find out if a box is genuine by using the Authenticity Check you will find on Habanos s.a.’s website at www.habanos.testwalking.com

Since 1994 all boxes have carried the Habanos seal as a mark of the cigars’ denomination of origin. No box of Habanos is shipped from Cuba without it. 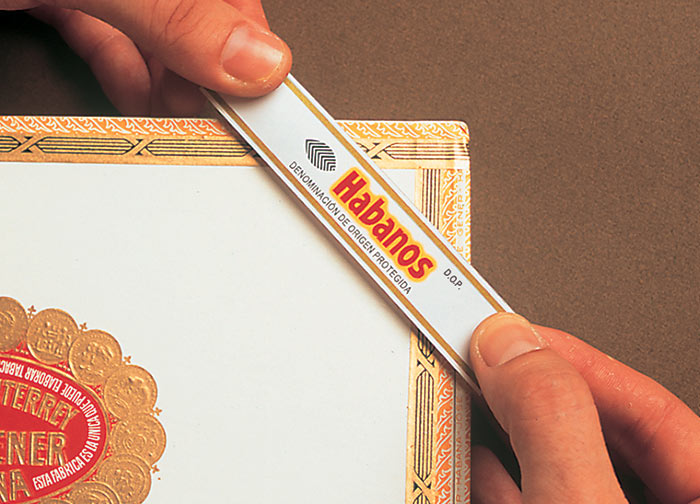 Individual countries or regions have their own certifying marks as an extra, local defence against counterfeiting. These marks are the responsibility of the local exclusive distributors. For more information about the stamp in the market where you are ask your local authorised Habanos Specialist.

On the bottom of the box

Since 1960, the funds of all Habanos boxes have a hot stamped stamp with the words ‘Hecho en Cuba’. Before that time, it was often written in English (‘Made in Cuba’). Since 1994, the bottoms of the boxes have also been hot-stamped with ‘Habanos s.a.’, the name of the company that distributes Habanos worldwide. From 1985 to 1994, the name was ‘Cubatabaco’. Nowadays they are marked as shown below: 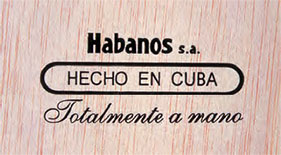 Totalmente a Mano – Tripa Larga
Since 1989 boxes of classic, – long-filler – Habanos have been hot-stamped with the words –Totally by hand’–. 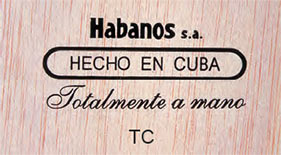 Totalmente a Mano – Tripa Corta
Boxes of short-filler Habanos are also hot-stamped with the words – Totally by hand – and since 2002 ink stamped with the letters TC ( – ‘Short Filler’).

There are also some boxes of cigars that are inscribed only with “Habanos s.a.” and “Hecho en Cuba” (Made in Cuba) omitting the words “Totalmente a mano” (Totally by hand). 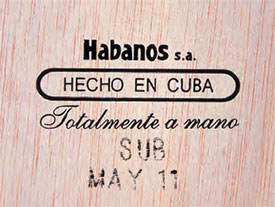 There are two ink-stamps on the bottoms of Habanos boxes. One is a secret code that tells the industry which factory made the cigars. The other is the month and year when they were boxed. The dates are not in code and the year is simple enough. The system started in 2000 with ‘00’, then ‘01’ and so on.

However, unless you know a little Spanish, the months may need deciphering. They are:

Habanos improve with age, so the date is important to connoisseurs.

Note: Ink-stamps indicating the factory and date of manufacture were first introduced on Habanos boxes in 1985 but both were in code. If you want to check the date of a box between 1985 and 1999. Ask your authorised Habanos Specialist.

Strengthening effective leadership in the Premium cigar business, looking out for the satisfaction of our customers and any party interested in it through worldwide marketing of such a high-quality product as the Habano, in world-class vitolas and brands.

A team of highly-qualified and motivated professionals in each and every stage of the Habano marketing process –highly committed to complying with legislations and regulations in force- is something we can count on.

The Quality Management System abides by the requirements of the NC ISO 9001:2015 standard, subject to a nonstop process of adjustment and improvement.

The policy brings the steadfast commitment of the Front Office, which eventually outlines, spreads out and favors the creation of an environment the personnel remains involved in and committed to through the continuous upgrading of quality management