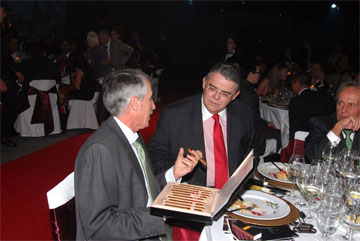 Havana, March 1. The Habanos’ Festival closed its tenth edition during the night of 29th February with the traditional Gala Dinner that paid tribute this time to the first decade of life of a unique event, just like the product that it promotes.

During the Gala, the Habanos 2007 Awards were presented to those who have made relevant contributions to the world of Habanos year after year. This year, the winners were: in the Communication Category, Mr Artashes Shirikyan, from Russi, to acknowledge his work as the Editor and promoting Cigar Clan Magazine, and as one Cigar Clan Club founders; in Business Category, Mr Ricardo Aramburu, from Spain, due to his high record of sales in Spanish market in 2007; and in Production Category: Cuban covered tobacco farmer Héctor Luis Prieto Díaz, who is distinguished by using innovative ways in the cultivation techniques and irrigation systems, besides his excellent tobacco harvest. 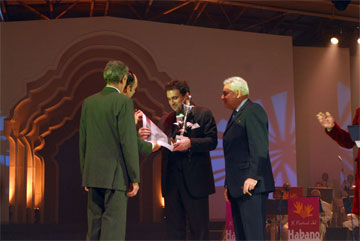 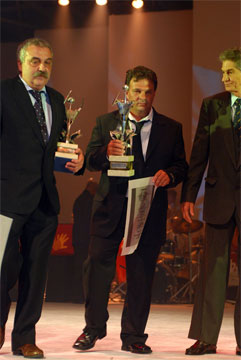 The expected Humidors’ Auction, which collection is totally forward the Cuban Health System, reached 945,000.00 Euros for the sale of 7 magnificent humidors, filled with more than 300 Habanos each. The humidor X Aniversario del Festival del Habano, sold in 260,000.00 Euros, was the highest bid. It is a highly valuable art craft piece, inspired on these ten years of Festival’s celebration, filled with 700 habanos from the main brands and all auctioned sizes in former Habanos’Festivals.

The name of the winner of the International Habanosommelier Competition was announced: Cuban Zudlay Nápoles, sommelier of the La Floridita Restaurant in Havana. Zudlay had already represented Cuba in this competition back in 2006, with the 2nd place.

This year, at the Final Habanosomelier Contest, she had to face Félix Hartmann (2nd place) , sommelier at the restaurant of the Burj Al Arad Hotel in the United Arab Emirates and Carlos Echapresto (3rd place), from the Venta de Moncalvillo Restaurant in La Rioja, Spain. 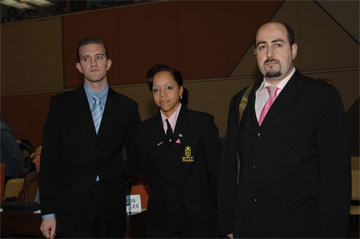 This is the second time a woman is awarded. Two years ago the winner was Manuela Romeralo, from Spain.

The three finalists were selected after the preliminary rounds held on the first day of the X Habanos’ Festival among a total of 8 participants, all of whom were professionals who had won the national competitions at their respective countries. The Contest held its 7th edition this year, and has become the most famous competition for professionals of marriage with Habanos. 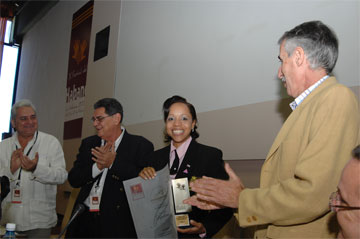 Mr. Manuel García, VP of the company, presented the 2007 commercial results, to a large audience of professionals and Habanos aficionados attending the Festival. The global turnover of the Habanos Group reached nearly 400 million $, representing an 8% increase over 2006.

In terms of value, Habanos sales increased 11%. The domestic channel (local distributors in each market) has experienced 10% growth, accounting for 79% of the total share, whereas the duty free and travel retail channel have gone up 16%, reaching a share of 21%.

As to the position of the company with respect to the competition and in terms of value, Habanos S.A. maintains its leadership position with a total value market share of 85%.

The main markets in terms of sales have been: Spain, France, Germany, Lebanon, Switzerland, and Cuba.

Regarding the main brands, Cohiba is the best selling brand, with 25% market share in terms of value. Montecristo has a 23% share in value and maintains its leader position in unit sales.

Habanos S.A., world leader in the “Premium” cigar market, sells Habanos in Cuba, and in the rest of the world, through its Exclusive Distributors network in more than 150 countries in all five continents, and through its “La Casa del Habano” franchises. These franchise stores have been very successful since their establishment, and have consolidated through an impressive business growth, and currently includes more than 130 stores all over the world, both in domestic markets in Duty Free – Travel Retail shops. These luxury Habano stores have become the benchmark for international retail sale of Habanos.

The consolidation and expansion of the La Casa del Habano continues to be one of the main strategic lines for Habanos S.A. for 2008.There are currently more than 130 Casas del Habano all over the world, and an for 2008 they are planned to open 37 more, mainly in Latin America, Europe, Asia, Middle East and Africa.

With a growth of 14% over 2006, this franchised network has become a reference in the Habanos retail sales.