To commemorate the 35th anniversary of the Cohiba, which is probably the most emblematic brand of cigar in the world, Habanos S.A. launches a special production of 500 numbered humidors. 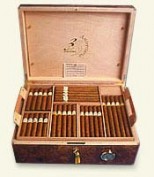 Cohiba was created in 1966 and is likely the most renowned tobacco product on the planet. That distinction was earned, among other reasons, by being the gift of Cuban leaders to other world leaders here and abroad.

The unmatched quality that these Habanos posses, likewise the fact that they were Fidel Castro’s favorite brand, contributed to creating the conditions to present this brand in society in the Ritz Hotel in Madrid in 1982. This made it possible to bring the myth of this cigar to the demanding cigar world.

Cohiba, whose name is the first denomination the indigenous gave the cigar, has become an example of how to maintain the tradition of Cuban cigar know-how with the modernity of being a vanguard brand. It maintains exquisite care in the selection of its tobacco, likewise the elaboration process in the “El Laguito” factory.

Cohiba is a unique brand for grand occasions.

These 500 numbered humidors constitute a selection of six vitolas for a total of 135 cigars per humidor.

The vitolas, all dressed with a special ring designed for this 35th anniversary, are:

For the occasion of this 35th Anniversary, two very special vitolas have been incorporated that don’t make up part of the habitual Cohiba vitolario:

The humidors, elaborated especially for this occasion, are made of cedar with as much quality as the product within: the best brand of Habanos, which is honestly equivalent to saying the best cigar brand in the world.

These humidors will be distributed through all Exclusive Distributors of Habanos S.A. starting in December, with the goal of being present in the best and most select sale points in the whole world: Las Casas del Habano.