Cuba is an island and Cohiba is its legendary treasure. This sublime “puro” combines the magic of an exceptional land with the genius of its creator, don Eduardo Rivera.

Its was adopted by Fidel Castro in 1963 for his personal consumption, and renamed three years later Cohiba, the native word for tobacco before the arrival of Christopher Columbus. Cohiba cigars only became available for sale in 1982. Since then, the circle of its aficionados has continued to grow. Today, there is no other “Habano” cigar that can match its exceptional reputation for excellence. The only thing it lacked was an ideal companion. Until now.

The terroir: Named “Vuelta Abajo” has moist red soil and a tropical climate. The land is ploughed using a humble cart pulled by two oxen.

The tobacco: Harvested by hand, leaf by leaf. The “criollo” plants flourish beneath the hot sun, whereas the “corojo” plants prefer the shade afforded by a light fabric screen.

Every tobacco plant is checked 150 times…
For it is a constant battle to ensure that every shoot will become a force nature. 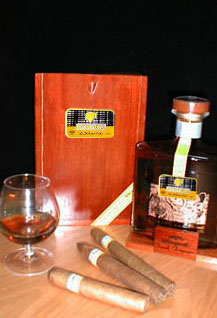 The land is chalky, like that of the champagne region, with dense stratified limestone and rich in sediments.

The climate: Sunny but changeable:
Dry and humid, hot and cold.

The grape: Varieties are 90% Ugni Blanc which has a high yeast content, and 10% Folle Blanche and Colombard.

The grapes: Harvested late in the season, rarely before the end of October, before being aged the hard way: such an estate has a great reputation to live up to.

Like the fingers on a hand, there are live leaves used to make a cigar. The top leaf, or “ligero”, which has absorbed the sun gives strength.. The middle leaf, or “seco”, provides the aroma and the ground leaf, the “ volado”, ensures good burning. These three “filler” leaves are rolled in a fourth leaf the “binder” and, finally, the whole is rolled in the precious “wrapper” leaf. These are the five secret ingredients that make a Cohiba cigar.

A cloud of hot vapour: Rises gently in the copper charente still, glides along the swan neck and, upon cooling, this noiseless tempest falls as fine rain down the spiral worm condenser, following distillation, the oak-wood will play its part in producing the cognac.

Ah, but this is not the wood of just any old oak trees, it comes from either the forest of the Limousin region or the Troncais Forest. Mighty trees, almost a century old, which have themselves been aged in the open air for five years before being subjected to fire and iron. Bisquit has its own cooperage. Oak barrels and casks are ready to be filled with the eau-de-vie.

The marriage of the oak: At the “paradis” cellar, where only the very oldest cognacs are the stored, the marriage of the oak with these fine Eaux-De-Vie lasts for 40 to 50 years.
Years of learning, an entire lifetime, is devoted to the rigorous selection and blending of the Eaux-De-Vie. Thus, under the implacable eye of the cellar master, the extraordinary alchemy occurs which will result in the harmonious union of Coiba Cognac Extra and its alter ego, the Cohiba Puro.

The eye embraces, the nose caresses, the mouth listens and the heart smiles.
Cradled in its wooden gift box, the sparkling crystal decanter promises strange powers within.

Once in the glass, the emotion begins to take shape in the amber glow of the robe, the velvety texture, a delicate bouquet of candied fruit and wild flowers and the fresh smell of woody undergrowth.

An intense complexity of flavours fills the mouth and the aromas persist in a unique sensual experience. And Cohiba Cognac Extra is born. 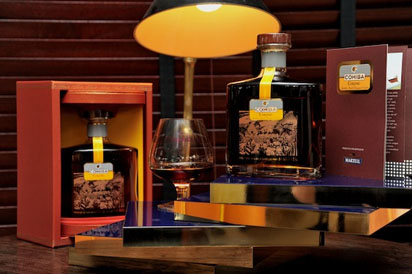