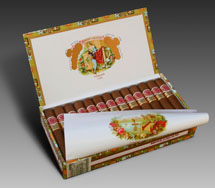 The new and much-awaited ring of the brand portfolio, Short Churchills, is the robust cigar (50mm girth, 124 mm length) that was missing from the Romeo y Julieta range. Its new tube container presentation incorporates the new image soon to be found on all the brand tube containers.

This cigar picks up the classic Churchills band, and incorporates the brand’s ring, with its characteristic burgundy red color. The Churchill range will soon display the image of the ring and the band together.

As to its organoleptic qualities, cigar smokers will appreciate the flavor and scent characteristic of the Churchills, one of the legendary vitolas in the Habanos portfolio.

Nowadays, Romeo y Julieta is a prestigious brand in the whole world, and offers one of the most extensive ranges of rings of the Habano brands, all of them completely hand-made with long-filler tobacco.

Short Churchills will be presented to the audience during Welcome Evening, the inaugural event of the 8th Habano Festival, with the performance of Shakespeare and his masks by the Ballet Nacional de Cuba, directed by Alicia Alonso. British actor Joseph Fiennes will also participate in this inaugural event.

News for 2006 and commemorative products from Habanos S.A.

Habanos announced that these limited editions do not only incorporate the customary two-year aging of the wrapper leaf, but also the filler and binder leaves are subject to this aging process. The objective of achieving the total aging of the tobacco is present in all limited editions to be launched to the market in the future.

Habanos Corporación remarked that on this great occasion, limited editions will include sticks, rings and bands commemorative of the fifth anniversary.

During the press conference held at the Hotel Meliá Habana, the new products were also announced, such as the new tube container for the Cohiba Siglo II ring, similar to the tube shape of the Siglo VI cigars, and the re-launching of the Culebras de Partagás, a ring of great character that will be fully hand-made from now on and will be much improved in its presentation.

As to the special series, a replica of an old H. Upmann humidor was presented, a true jewel for collectors, with a limited production of just 200 units, to contain 50 “tacos imperiales” (49 x 168 mm in size). The incorporation of Trinidad to the Habanos Collection was also announced. It will be composed by 500 containers (the traditional books) including 20 cigars under the factory name “Torre Iznaga” (52×170 mm size).

Finally, Habanos has selected the Asia Pacific, German and French markets for its 2006 regional editions (exclusive rings for a very limited number of markets during a maximum period of two years).

In the Italian market, due to its great success, last year’s regional edition, the superfine cigar from Punch, will be launched again.

The presentation of the new Petit Cazadores from José L. Piedra (43×105) was the final announcement of the press conference.